I grew up in an era where South Africa still fought an unpopular war in Namibia. Since I was very small we heard the names of Army bases in old South West Africa, where “our boys” were fighting the “communists”.  I am not going to be drawn into the politics of that time or war.  My only point is: I have heard of these places since very small, places where some of my age men have fought and died.

On this day one of our first stops was in Grootfontein. That is the sight where one of the main Airforce Bases were, where the troups who flew up to the war zone arrived. The place holds a lot of memories for my age and older South African men, of arriving, or of seeing friends leave in body bags.

South Africa left here in 1989, and we were still not welcome at the airfield, we were escorted out of the place till we reached the main road.

We put together a quick lunch from a supermarket in the brand new mall in Grootfontein. And then we hit the road to Otavi. It is a beautiful ride to Otavi, passing a beautiful range of hills. It is also the sight of some mining activity.  Otavi was a base for mechanized infantry in the war, and is now just a sleepy little town. It was Friday, Payday at the end of the month.

From Otavi we headed to the beautiful town of Otjivarongo. Before the tour our leader spoke to the young pastor of the local Dutch Reformed Church. She said the camping resort in town was not too bad… So we headed to the Acacia Resort in town. It was affordable, but that was about it.  There was at first no hot water, and some broken taps in the bathrooms. The owner blamed a tour group from Gauteng for the state of the place… but it looked a bit more neglected than that.

The Camping site is just plain sandy, and far from the bathrooms. Hot water was at first not available, and after fixing just scalding hot. On the other side of the Resort’s Pub there is a Charismatic church, that with a loud sound system had a battle with the devil till midnight. And on the other side of the resort the devil was answering from a nightclub, cashing in all the paychecks of Otjivarongo, and belting out hard music till about 5 o Clock the morning.

So yes, the Acacia CAmpsite is also not our best memory of the tour. But the town itself was not bad. They also have a very nice Wimpy with wifi available.

On tours like this we don’t see elephants and beautiful trees every day. Some days are hard, some camp sites are really bad. But we need these days too to reach some excellent destinations, just like in life itself. We just had to go through days like these…  And it is part of the story, and good memories afterwards.  You will just see- I took very few photos in these stretches, just not that much to see then. But from Day 8… keep on watching this space!

PS- I only now started realizing most people in the civilized world will have no clue to where in the world we are.

So just to bring you up to speed- I live in Nylstroom, which is 130 km North of Pretoria, South Africa’s capital.

The first three days took us from Nylstroom up to Kasane in Botswana: 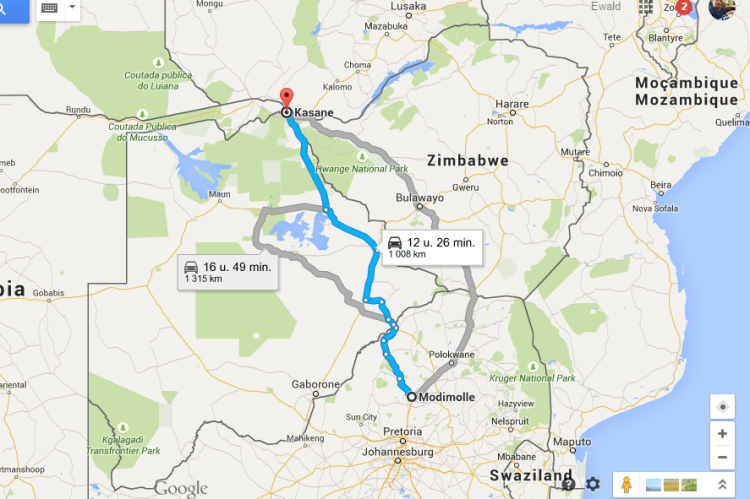 From Kasane we took the Caprivi Strip to Rundu:

And now you will be able to find the places we talk about, I hope…